I am currently setting up an experiment using OSWeb which contains of auditory and visual stimuli. I couldn't be sure whether I should write on OSWeb forum or on JATOS forum, but I thought that it is mostly related to JATOS so here I go. Structure is basically like this:

-In the loop, first item is a sketchpad for ISI which lasts for 1000 ms.

-Second item is audio sampler. Duration is set to 0, and real duration of the audio file is 100 ms.

-Then comes sketchpad item. As the duration of the sampler is set to 0, sketchpad is presented at the same time with the audio file. It only contains of a fixation dot and its duration is set to 100 ms as well.

-Fourth item is also sketchpad, but it contains the real visual stimulus. There is only one stimulus presented either on the right or left hand side (as you could see in the attachment, but only one of them (left or right) works depending on a different variable) , and its duration is set to 0 again. Because there is a keyboard_response item after that. 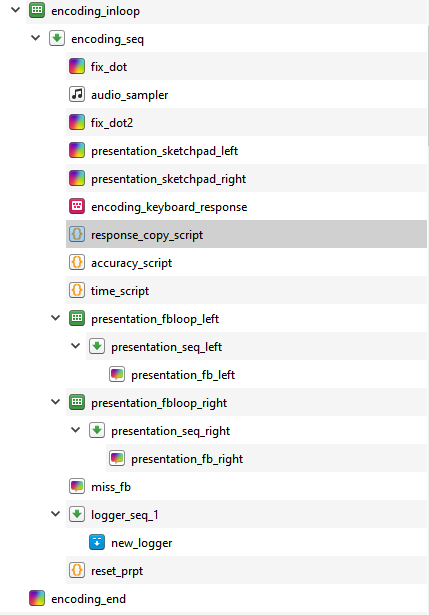 I wrote a script for a workaround so that the planned presentation time of the visual stimulus is 4 seconds (this is also the timeout variable of the keyboard response), and whenever subject presses a key, a new duration variable is calculated which is (4000ms - response_time) and another feedback item is presented with the duration of that new variable. For example, if subject presses the key after 1500 ms, new duration variable is 4000-1500 = 2500 ms. And the feedback item which is exactly the same as the sketchpad item, is presented for 2500 ms after the sketchpad.

-To sum up: Audio is presented for 100 ms along with a fixation dot, and at the time when the audio play ends, visual stimulus presentation starts.

The problem is, however, when I run it on JATOS, timing varies between the browsers and computers. I tried the experiment on 3 computers. I might be wrong but based on my observations, Firefox works very well most of the time and timing was precise in 2/3 computers. But it was not as precise in a third computer that i tried out. Chrome was performing worse - there is a noticable overlap between the auditory and visual stimuli. Thus, I have 2 questions:

1) Is there any objective way to see when the loop items (or stimuli) are started and ended? I used my mobile phone's slow motion camera to see the difference but it is not an optimal way :)

2) Is there any way to standardize the presentation times? I mean, I can make the subjects download Firefox but as I mentioned before, it didn't work very well in one of the three computers so it seems like I might need to find another way.

Thank you for your time in advance.