I'm preparing to run an ERP study that requires sending triggers to a Biosemi Actiview system at specified points throughout the study. My PC is connected to the BioSemi system through its parallel port converter cable, which converts a parallel port to a regular USB port.

However, OpenSesame's parallel port plugin doesn't seem to recognise this connection, as technically, I suppose it is a connection through a regular USB port. Perhaps another complication is that I'm on Ubuntu Linux, so can't use the Windows-only parallel port options.

So far, I've tried the following:

This returns the following error when trying to start up the experiment:

Similarly, changing the path to /dev/serial/by-id or /dev/serial/by-path results in the same message. This surprised me, as my system tells me this is where the connection is located: 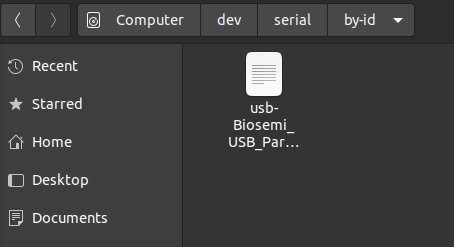 I also tried /dev/ttyUSB0 as I was suggested this may be where the connection is located as well:

This didn't work either, and neither did /dev/ttyS0 or /dev/ttyS1, or any of those, really!#

So, this means I'm officially stuck -- would really appreciate suggestions from people who have encountered this problem themselves.

Just for reference, I do have access to a Windows installation so would be able to switch to Windows if necessary. If the problem is Biosemi's parallel port converter, though, this probably wouldn't help.